Have You Seen One Of These? 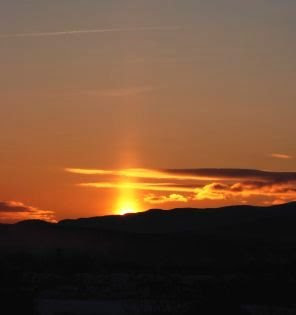 A listener recently wrote to VPR, describing an unusual sighting she had witnessed...

"A couple of weeks ago, I was driving home, through Morrisville, when an unusual sunset caught my eye. It was a fairly cold day, following a fresh snowfall, and the moisture in the sky gave the far off appearance of mist. The horizon was light pastel--mostly blue--except for a wide, deep strip of orange light beaming directly up from the sun; this striking phenomenon was unlike anything I have ever seen. It was like a Star Trek beam- or a spotlight, shining straight up to space. What specific conditions caused this phenomenon?"

...and Eye on the Sky meteorologist Chris Bouchard shed some light on the mystery:

" What you describe sounds like a "sun pillar" to me...sun pillars are caused by clouds of ice crystals of a particular shape, reflecting the sun's light toward your eye. Hope this helps! Best, Chris Bouchard"

So, the next time you see something unusual in the sky - contact VPR and tell us about it!

Posted by Cheryl Willoughby at 7:43 AM