VPR's Steve Zind is back in Iran this month.  Steve first visited the country in 2004 in search of his family history. He is a descendant Karim Khan Zand, who ruled Persia in the mid 1700s. Ever the reporter, Steve shared his remarkable experience in the VPR series, Iran Journal. He's been back several times since, filing stories for VPR and other public radio programs in 2005 and 2006. On Wednesday's The World, Steve reported on Iranians' reactions to President Obama's inauguration.
At VPR we always look forward to Steve's emails to us, so we thought we'd share this one with you: 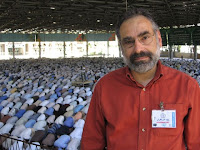 I'm safe and sound in Tehran.  Its been the usual "hurry up and wait" dealing with all the press permissions, arranging interviews, etc.  But things are going smoothly so far and much of the time has been filled hanging out with friends - an experience that provides the keenest insights into what's going on here.  Translator Pedram and I did a few interviews today at the Martyr's Museum across the street from the old American Embassy in Tehran and at Ayotollah Khomeini's Tehran home.  I interviewed a man there who was visiting because the Khomeini had come to him in a dream the night before and held his hand.

The people I spoke with were very pro-revolution, pro-Ahmadinejad.  I noticed they've freshened up the painted anti-American slogans on the embassy walls probably in anticipation of the upcoming 30th anniversary of the Revolution.  We strolled through an open gate onto the embassy grounds but were turned away after a moment.

There are banners throughout the city showing gruesome photos of Gaza.  The other day I came across a group of young men who were offering people a chance to throw shoes at photos of Pres. Bush, Obama and the Israeli Foreign Minister.  I guess they couldn't find an Olmert photo.

Another clear difference I'm seeing is the presence of more police - like the Gasht Ershad, which means 'search guidance'.  They patrol in north Tehran to enforce proper hejab for women and correct dress for men.  Friends tell me the crackdown on dress is much more ongoing than in the past, when it's been more intermittent. In spite of it women seem to have pushed the limits of the dress code even further since my last visit.  It's always important to remember that these are things you generally see only in parts of Tehran and a few other cities. Many, many women wear the enveloping black chador out of custom and for religious reasons - and even for women who object to the imposed dress code, there are much more important issues that concern them, regarding their rights under Iran's laws, which still lag behind men's.

Yesterday I went to the holy city of Qom to interview Ayatollah Sani-e, a clerical big wig (or big turban?) and one of the more progressive senior clerics.  He's in his 80s with a wispy beard, a bullhorn voice and a mischievous smile.  He's one of ten Grand Ayotollahs in Iran. Ayotollah Khomeini said once that he considered Sani-e a son.  But Sani-e's call for reforms in Iran's electoral system and more rights for women is out of step with the conservative mainstream.  I asked him how much debate there is over these issues in the madresseh's of Qom and he said very little:  a student who speaks up is likely to have his financial support withdrawn.

Last night I watched the inauguration on VOA and BBC Persian with the family of a friend.  People here are excited about Obama but worry that he may not keep his promises.

Today I spent some time talking with Nobel Peace Prize recipient Shirin Ebadi.  She's recently come under increasing attack from conservative, government backed elements here.  Her office, which is also her home, has graffiti scrawled on the walls accusing her of being an "American witch" among other things.  She told me she called the police when the vandals were spray painting her walls and they just came and watched.  A few weeks ago the office of a Human Rights organization she founded was closed.
As you can see, I'm having a great time talking to people, but its always a challenge getting all the pieces necessary to do a complete story (or two or three) and that's a struggle right now.

The weather here is actually very pleasant.  It's cold at night, but during the day gets up to about 50, which is perfect walking around weather. (I hear its been very cold there. Sorry.). I've been taking the Tehran subways and buses everywhere, which is much faster and cheaper than cabs.
Warm regards,
Steve
Posted by Michelle Jeffery at 3:26 PM